Airsoft Pistols - What to Know as a Beginner!

There is a huge buzz around with regards to airsoft guns these days. People are often found talking about these guns and their uses. Those who have never used them are always keen to figure out how cool they are.
Many think they are just the toy guns kids use for playing. But they are actually pretty different. If you are a beginner or trying to begin your career in airsoft, there are plenty of things you need to be aware of. It has never been the case that you can get your hands on the guns straight away and get going.
You need to know all the rules and regulations associated with the use of these guns. Also, you must be aware of what exactly these guns are. In this article, we will be focusing on the different types of airsoft guns, the activities you can do with these guns, things you can’t be doing with them, and every essential information that a beginner needs to know about these guns.
To start with, here is a brief explanation of what kinds of guns these are:

What are Airsoft Guns?

Airsoft guns are the safe guns used for playing airsoft sport. There are other activities usually done with these guns, but airsoft sport is particular. But these guns are designed for those who want to experience realistic firing in a safe manner.
These guns replicate the original firearms. They have similar firing mechanism and have similar parts. However, there is one huge difference. These guns fire plastic BBs which makes them absolutely safe. A few of those guns also sound like original guns.
Airsoft guns can be found in plenty of shapes and forms. There are airsoft pistols, rifles and airsoft sniper rifles. All of these are a replica of real firearms. So, those who are reluctant to use real guns due to safety concerns can use these replica guns to do some realistic shooting.
There are different types of airsoft guns, let’s uncover those types.

Electric airsoft guns are sometimes called automatic electric guns. These are also commonly used by the airsofters due to strength and power of these guns. They use rechargeable batteries that drive electric motors.
As a result, it cycles an internal spring assembly for launching the BBs. They are named as automatic guns or AEGs because they have both automatic and semi-automatic options.
They offer high velocities often ranging between 200 and 500 feet per second. The rates of fire usually range between 400 and 1500 round every minute.

Gas airsoft guns are of two types, blowback and non-blowback guns. Blowback guns are the most popular guns used these days. These guns also provide realism and precision.
Gas blowback airsoft pistols are semi-automatic and use CO2 or green gas. This compressed air is used for expelling the BBs from chamber without cocking the slide all the time. These guns kick back every time you fire it which makes it named blowback gun.
Also, these are the most realistic guns. On the other hand, gas non-blowback guns incorporate pistols and revolvers. However, they don’t have a slide which kicks back, but fires with a semi-automatic mode.
These guns are not pretty realistic though!

Things You Can Do with Airsoft Guns

Airsoft guns are made for different uses. People tend to use them for doing different outdoor activities. Because they are pretty safe, even kids can play with them. Anyways, from youngsters to adults, almost everyone is seen enjoying while using these guns.
As a beginner you must be aware of different ways you can use these guns. Here are a few things you can do:

Target practice is the first thing that everyone does with airsoft guns. This is a really enjoyable activity for every age group. Whether you are a student playing along with your mates or you are a worker playing with your colleagues, you can enjoy every split of a second.
As a beginner, you must know how to do this activity before you involve your friends. All you need is just one airsoft gun and a wooden target. You would be firing the gun to hit the target with the BBs.
There is no need to purchase a target from the market, rather, you can construct your own. Just take some wood and draw a circle to determine the target.
Now, take your gun and try to hit the target one by one. There can be five turns for each player. In the end, know which player has hit the target more often. The winner would be the one who has hit the target at more occasions.
Don’t mix it with throwing sport, the BBs won’t stick into the target. So, keep a close eye on the target to see where the BBs are hitting. You can have airsoft pistols or rifles for target practice.

Airsoft gaming is the most common thing to do with airsoft guns. Unlike target practice, you can’t have anything like pistol or rifle to play these games. Rather, the type of gun you require depends upon the game you are going to play.
For instance, you can use airsoft pistols if you are playing a game like President. On the other hand, if you are Sniper, you would definitely need Airsoft sniper rifle. This is what beginners must know before buying their guns for playing airsoft games.
If you are destined to become an airsofter, you should have different guns in your arsenal so that you can play every game.
Those airsofters who are looking to play airsoft games for fun purpose, keep in mind that you first become fully aware of the rules and regulations of every game. Also, you should know the safety rules for playing these games.
There are different rules for each game. For example, in President, there must be two teams. One will be defending the President while the other will be trying to kill him. There is a safe spot at which the defenders need to take the President before he is killed by the assailants.
Hence, it is important to learn about the rules of every game before playing it. However, airsoft gaming is a really enjoyable thing to do.

Things You Can’t Do with Airsoft Guns

Many beginners have misconceptions regarding airsoft guns. It is necessary to clear those misunderstandings. Many thinks that these are dangerous guns that can do serious damage. A few confuse them with pellet guns.
But pellet guns use steel BBs and are not even like original firearms. Since people are confused about these guns, let me clarify that they are not manufactured for the following purposes:

As many people consider them a type of pellet guns, they think they can do hunting with them. For example, beginners think that they would be doing small game hunting which is impossible.
Since airsoft guns use plastic BBs, they don’t have the essential power to take down small game like rabbits, squirrels and quails etc. However, if you do try small game hunting, it will be just a failed attempt.
There is no way you can do hunting with these guns because they are designed for safe use. They don’t cause any damage when hit the body of a person. The only vulnerable part is the eyes.
Hence, you can never think of hunting with airsoft rifles.

Many people head to the market to purchase airsoft guns thinking that they would use them for self-defense. People think that they are designed for defending against the attacker. But this isn’t the case.
They are never intended to be used for self-defense. Instead, they are just designed for a safe play. If you do try it for self-defense, you would end up being victimized by the attacker and also losing your gun.
A plastic BB is unlikely to cause any injury or damage to him. There is only one case it would be effective; if you target his eyes which is almost impossible. So, don’t think your airsoft gun can work in a self-defense situation.

Are There Any Safety Concerns with Airsoft Guns?

The normal perception is that airsoft guns are pretty safe. But, why do we talk about safety issues associated with these guns? In fact, there are a few safety concerns that you need to be aware of as a beginner.
Before you start using these guns, know some significant safety rules and measures. Here are a few essential safety guidelines:

As you are now completely aware of airsoft guns, it is necessary that we reveal the best airsoft gun for beginners. AK47 Spring Action Airsoft Rifle is the most accurate option for beginners for some reasons.
It is a replica that looks very realistic. A beginner should always prefer spring action guns. Also, it is one of the cheapest airsoft guns available in the market. So, if you are a beginner, get your hands on this replica AK47. 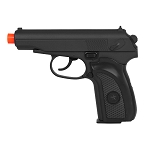 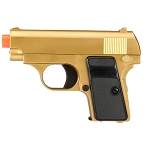 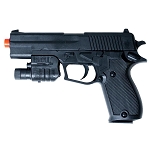