Exploring The Extraordinary Features of a Butterfly Knife

Knives have been the essential items owned by the humans. There is hardly a person who does not own a knife. There are a at least a couple of knives found in every house.
Knives are extremely useful because they serve plenty of purposes. Since they have been invented, they were used for accomplishing several tasks, including cutting veggies and fruits, self defense, fighting and hunting etc. However, the knives were improved and made more sharp, stylish and able to serve more purposes.
In the modern days, different knives serve different purposes. Also, the styles and designs are different. One of the stylish and uniquely designed knives is the Butterfly Knife.
Butterfly knife is an incredible knife and the modernized one. Generally, a knife incorporates just a blade and a handle, but this is one different knife. There is a history associated with this knife that makes it special. What makes it even more special is its unique shape.
So, this is a mystery knife that has diverse features than all other knives. Let’s explore the knife and its features!

What is a Butterfly Knife?

Butterfly knife is the most fabulous knife ever designed. The knife has the most diverse shape. There are two handles that enclose a blade. There is a single blade though which is hidden inside the two handles.
When the handles are closed, the knife looks like a stick. To deploy the blade, you need to unlock and open the two handles. When the handles are completely opened, they connect and get locked.
Now, it looks like a normal knife, but a longer one!
There is a less research regarding how the butterfly name come, but it has different names. Many people know it as a balisong. It is considered a dangerous knife due to it unique appearance and design. This makes it a little difficult to handle. The unskilled users are often concerned about using this knife.
Why not? You are vulnerable to risk if you have no control over the knife. This led to a safe version of this knife, known as Butterfly Knife trainer knife. It is a knife with blunt blade which is safe to use.

As we dig the history of this unique knife, we fall into a controversy straight away. The history of this knife as unique as its shape. There are two nations that claim to originate the butterfly knife.
Philippines claim that this knife originated in Philippines while French are determined that the knife was originated in France. However, we are not exploring this controversial history. Rather, we would discuss both historical versions of the balisong.
Philippines is believed by most of the historians as the real birthplace of a butterfly knife. The roots of the knife go back to 800 AD. The knife was believed to be opened quickly using one hand ready to serve as a weapon.
The knife was quite common as a utility and a self defense weapon. This was how the knife served in Philippines, let’s move to French history of this knife.
A few historians claim that butterfly knife originated in France in the early 18th century. This was another version of this knife, however, not different in terms of design.
It referred to a measurement devices that only served for measuring and not for self defense. Though, the shape of both these versions is same, the difference lies in their usage. The modern butterfly knives are close to Philippines version.
So, forget the older versions, as they are controversial, and move to the advanced butterfly knife. The modern balisong is a nasty knife that has some extraordinary features. Let’s explore their features!

As mentioned above, a balisong has just one blade, but two handles. There are two states of the knife, one is the opened and the other is closed. When closed, the blade is concealed inside the two handles.

The two handles are connected, making it look like a stick. When closed, the knife is locked and remains in the position unless the handles are forced to open.

This is the opened state of the butterfly knife. In this position, the knife is locked and remains open unless the handles are forced to fold again.

Butterfly Knife is an extraordinary knife for self defense. The enthusiasts and users term it the most badass knife ever designed. It features a very sharp blade that has the ability to tear someone into pieces.

It is designed accordingly with the self defense needs of today. What features would you essentially want in your self defense weapon? Obviously, the ease of carry, above all. Balisong knife is perhaps the easiest to carry weapons for defense.

As mentioned before, the two handles are folded to conceal the blade and make it a stick. This small stick can be carried in the pocket, small bag or even purse. Also, the knife is lightweight and comfortable to carry.

Secondly, the knife has the required strength to be your foremost self defense weapon. The blade is extremely sharp and has the power to frighten the attackers.

The attacker would fear such a unique and badass knife because he knows it would inflict some serious injuries to him. Having a balisong in your hand would be the best way to survive these random attacks. The size of the knife can be lessened to make it such a small stick!

Knives are usually difficult to handle or control. But, with the improvement in the styles and designs of the knives, the modern knives have become easier to handle. However, not all the knives today are easy to control.

Butterfly knife is perhaps the easiest to control or hold. Holding this knife is like holding a stick. The two handles when pulled apart meet from the other side, and get locked. When they are locked, they make a very thick handle.

Holding a knife with such a thick handle would be relatively easier. The locking mechanism ensures the handles are secured in that position.

Controlling the balisong knife seems quite challenging, but is never that difficult. It is in fact the simplest to control knife. The locking mechanism makes it ridiculously easy and comfortable.

However, the handle becomes a little thicker because it is a combination of two handles. So, controlling this knife is similar to controlling any other knife. All the stories about the challenge to control it are lies!

Butterfly knife, in my opinion, is the easiest to carry knife for a few reasons. Folding knife does conceal the blade inside the handle, but the blade is visible from the handle. Also, one can easily figure out that the blade is folded in the handle.

On the other hand, with a butterfly knife, one can’t identify that the blade is concealed inside the handle. When closed, the handles would be connected and locked, hence, it would be just a stick and nothing more.

Carrying a pocket knife in the pocket is not that simple. The blade can be accidentally opened by either pushing a button or providing some assistance. In case of butterfly knife, there is no such problem.

To conclude, it can be said that there is no better knife today than a butterfly knife. Butterfly knife is the most incredible knife ever designed. The features and advantages that this knife offers are not found in any other knife. If you are looking to add a knife in your arsenal, make sure it is the butterfly knife. 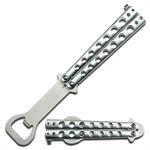 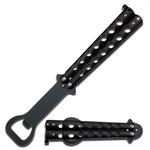 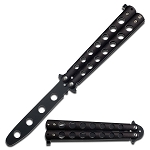 Black Butterfly Knife - For The Love Of The Color Black 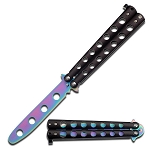