Here’s Everything You Should Know About the Kunai Knife

A Japanese tool or weapon that is derived from “Masonry Trowel” is known as the Kunai knife. There are differences found in them because some of them are short kunai while some are big kunai.
Though Kunai Knives are one of the basic tools commonly used in martial arts, they can be used as a multi-purpose weapon.
Nevertheless, if we look back to the history of these weapons, we will know that these knives were used by the ninjas to dig holes into walls. They were used as the primary, as well as, the secondary weapon by the famous ninja characters of manga and ninjutsu.

What Is A Kunai Knife?

The length of a kunai knife ranges between 20 centimeters to 30 centimeters. The prime usage of the Kunai was by the peasants as a gardening tool. Moreover, it was used by the Masons for the work of stone.
The blade of this knife is constructed with soft iron material and the edges of the blade are left unsharpened. The boundaries of this blade are used for smashing softer material, like the plaster and wooden stuff. Mostly, only the tip of the knife is sharpened.

Design of the Knife:

The blade of this knife is leafy shaped and the handle has a hoop on the pommel for attaching the rope.
The rope that is attached to the handle of the knife, provides help to perform the function with a good grip. This rope is also helpful to be wrapped to the body for covering. And sometimes, it is also used as an anchor or a piton. 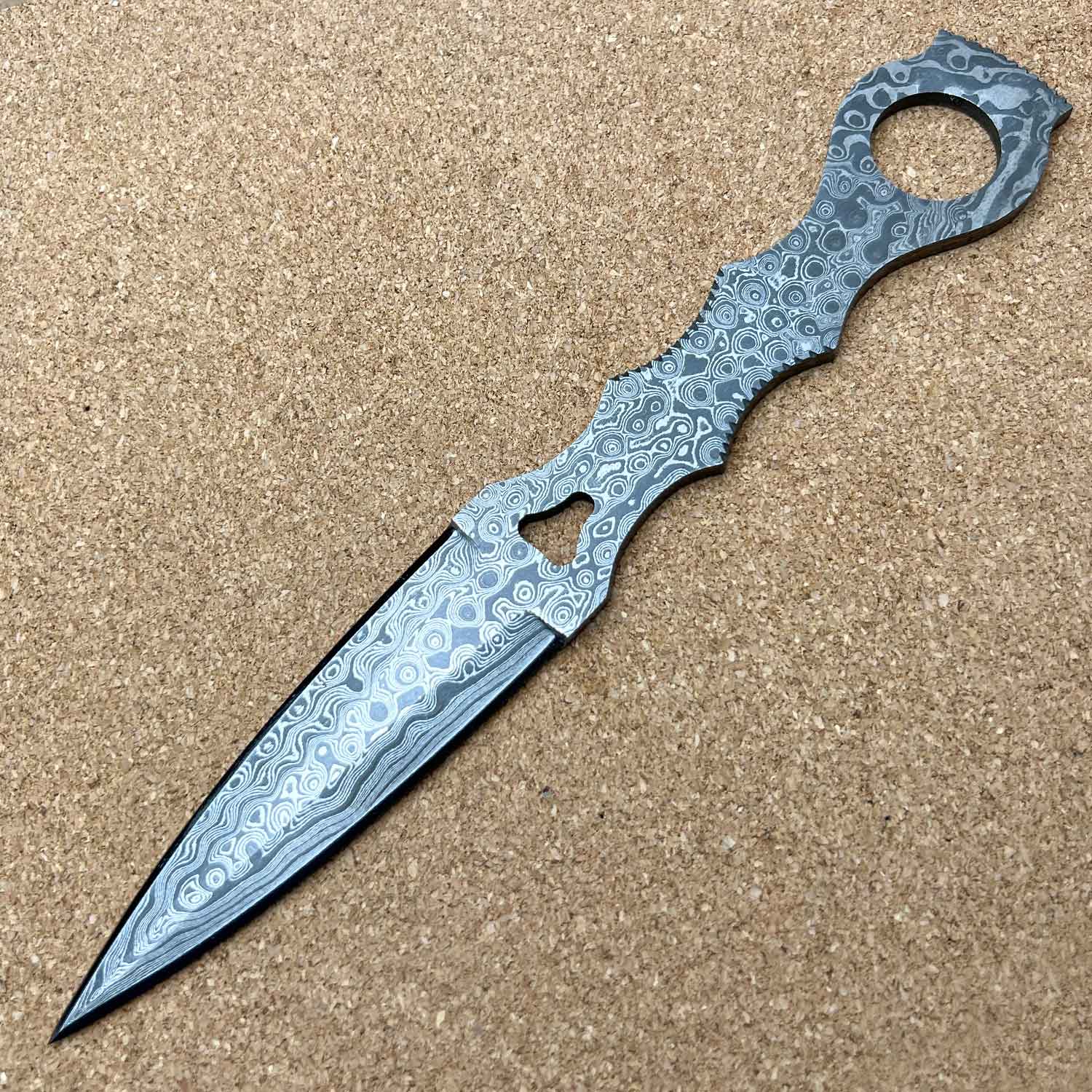 Disagreeing to the belief that kunai Knives were primarily designed as the throwing weapons. But, they were mainly used as multi-functional tools for stabbing and thrusting applications.
Well, nowadays, different varieties of kunai are available, such as the short, wide, thin, or even saw-toothed blades are found in them. However, sometimes, the handle of a dagger is used with them and thus it becomes quite difficult to distinguish these blades.

Also Read: The Essential Guide for Throwing Knives for Beginners

Uses of A Kunai Knife:

These blades are used for a variety of tasks and some of their uses are described below:

A great variety of ninja weapons that we are using were primarily used in the farming fields.

The kunai blades were very cheap knives as they did not cost much money. Therefore, the ninjas found them the easiest tool to be made a great weapon.

Being a weapon, they are heavier than the shuriken of the ninjas. And, they are more easily used in close combat as compared to the shuriken because their handles provide a solid grip.

These knives are also helpful for those who love climbing mountains. You can use a kunai as a hook to stick on the rocks or as a piton.

They are also considered the best masonry tool. From breaking small stones or rocks to plastering things, they are convenient to use. As the edges of these knives are not sharpened, so there are fewer chances of injuries to oneself.

A Kunai knife can be best used as a throwing knife. Because of its shape and size, you can easily throw it from a long distance. Normally, such knives contain a finger ring on their handle that gives a better grip to the holder.

Moreover, you can use this ring for better control of the knife while throwing. This is why they are widely used as throwing knives in different games and competitions around the world.
Are you interested to know how to throw a throwing knife?
Click here to learn the best tricks.

In the olden times, Kunai knives were mainly used by the farmers for gardening purposes. Still now, in a few areas, they are used for farming, gardening, and digging holes as well.
Because of the leafy shape of the blade, you can dig deeper holes and perform tough tasks easily.

How to Construct A Steel Kunai Knife?

A kunai knife is a heavy tool or weapon to carry. Generally, it is a straight leafy shaped blade used as a throwing weapon. It became very common after it was seen in a cartoon show called the “Naruto”.
Below we are going to describe how a steel kunai knife is manufactured.

Material Needed In the Construction:

The materials generally used in its construction are as follows:

The first to do is to take the steel blank, then imagine the picture of the kunai knife and create an outline of the shape on the steel blank. The best thing to do is, to begin with, the tip of the blade. On one side of the steel blank, draw two lines of 3 inches to the outer side of the blank.
Always use a ruler to draw the lines straight. Afterward, draw two lines on the inner side. Later on, they will become the rear edges of the knife. In total, the length of the knife’s blade should be about half of the length of the blank. The width of the edges of the blade should be 1 inch.
Then, two more lines are drawn that should be parallel and they should be directed straight back.

In this step, place the steel blank in a straight and tight position so that it does not move. The second effort the maker has to do is to put on his glasses and his gloves. Afterward, he needs to utilize his plasma torch to trim the shape of the knife. Try to cut on the outside chalk lines rather than cutting from inside.
Now, the maker keeps the steel blank aside when it is properly cut. Place the blank in a straight position and take some rest. Lastly, don’t forget to scorch a hole through the metal ring center in the rear part.

Once he is done with cutting the blank, the next step is to bring it to his bench grinder. This step can be considered as the most time taking process of fabrication. Now, the maker has to use his grinder to trim the handle and the ring part of his knife.
Then, spend the maximum time to sharpen and give a soft shape to the blade of the knife.
Later, he has to flip the knife and properly grind each side of the blade until they are positioned toward the center area of the knife. As well, the tip of the blade should be sharp and pointed.

In this step, the maker has to use the diamond-shaped filer to properly file the edges of the knife till they become soft and smooth. There should be no burs or any kind of imperfections found by the visible eye.
Then, he has to take out his round-shaped filler to file the inside of the rear ring. The purpose of these rings is not very clear but they are often seen in films and cartoons.
These rings are used when the finger slipped down it gets stuck in this ring and stops the knife from slipping. Moreover, it also creates the effect of a knuckle duster.
Thus, the ring should be perfectly smooth and should have a space to accommodate one finger so that the user’s finger doesn’t slip from the knife.

In the last step, the maker needs to use half the length of the nylon cord through the center of the ring to create a better grip.
Afterward, try to fasten the nylon cord around the thin part of the handle. It should be between the blade and the ring of the handle. Also, try to wrap it like lacing the shoelaces.
The maker has to cross the chord like shoelaces as cross them over one another every time they come back again. Cut the excess length of the nylon chord by using a lighter. And that’s the final step to do.
Now, the steel made kunai knife is created. The maker can customize the knife’s blade and handle it with different colors and shapes according to his own will.
As this is his own creation, so he can add or change anything in it according to his requirements and needs.

Precautions to Apply While Using A Kunai:

A kunai knife is a multi-tasking tool that can be used for many purposes of daily routine.
However, these are mostly used in martial arts and throwing knives competitions and sports, etc.
If you are willing to have these multi-functional knives, start exploring the exclusive collection of Kunai Throwing Knives at Knives Deal. 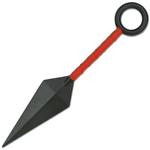 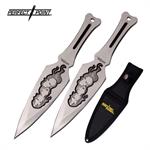 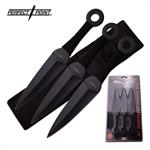 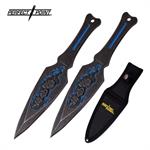 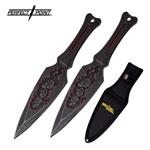