History and Classification of Short Sword

Short sword, as the name suggests, is a relatively smaller sword than an original sword. It is a single-handed sword with a handle that just features a grip with a single hand. This was a popular sword during the Medieval era. Specifically, it was a frequently used sword in the European nations. They served as blades for everyday cutting, but importantly, they were used as primary fighting weapons during wars.
The greatest benefit of a short sword is that it is small, very lightweight and extremely easy to wield. But, when dealing with the enemy who is equipped with a long sword, this smaller sword poses a disadvantage. It becomes difficult to injure the opponent from a distance due to lack of reach or length of the blade.
However, it was not necessarily a primary fighting weapon. It also served as a secondary or reserve weapon by the fighters. Medieval warriors in particular used it as a backup weapon in case they lost their primary fighting sword. In addition, it was used in Europe by the civilians for street fighting and self-defense.
There was no single type of short sword. If we explore the history, we can figure out plenty of them. However, following are a few most popular ones:

Seax was a fantastic short sword which was first used by the German infantry. A popular tribe that wielded this sword was known as the Saxons. This tribe gained popularity during medieval times. They are still popular just because of this fabulous sword that they wielded. The sword featured an overall curved and notched blade.
Saxons used to manufacture different types of Seaxes. These swords were then delivered to Great Britain and northern areas of Europe during the medieval era. Different types of seaxes included narrow seaxes, broken-back seaxes, and many other variants.
Generally, a seax had a tang in the centerline of the blade, and inserted into an organic hilt, handle or wood. However, the blade featured just a single edge. The blade was worn in a scabbard horizontally and that scabbard was attached to a belt. The edge of the blade was usually upwards.
Most historians believe that the blade of the seax was inserted into a horn or wood hilt. However, the history is unclear whether it served in daily cutting and slashing actions or was used majorly for fighting on the battlefield. There are also evidences that the use of this short sword declined when the Saxons engaged in a settlement with the British.

Baselard was another short sword that gained popularity during the medieval period. However, it earned its place during the late medieval times. In the 14th century, it was adopted as a fighting weapon in Europe. But, it was also very commonly used by the civilians. Not all the people consider it a sword. A few believe that it was a massive dagger.
Historians also determine that outlaws used to carry this small sized sword as a sidearm weapon for fighting street feuds. During the late Middle Ages, the weapon gained a great social acceptance and became a part of fashion trends of that era. The use of this particular sword continued till the end of the 16th century.

Falchion was a short sword which was popularly used from the early 13th century to the late 16th century. It was used in a dominant part of the Euoropean Continent. The sword featured a single edged blade along with a hilt that could be used by a single hand. A Falchion always had a slight curve on the blade like many medieval era swords.
This sword is believed to be a close resemblance of the machete knife. Also, it reminds of the great Persian sword known as the Shamshir. The credit to evolution of this fabulous sword goes to Mongol and Turkish attackers who reached the European borders and attacked the people nearby.
The major use of this sword was fighting the enemies on the battlefield but it also served in cutting tasks. Many historians believe that it replaced the ax for domestic work. It is also determined by the Historians that this sword was used by the noble families during the 16th century and by the peasants.

Gladius is actually a latin word and is used for sword. But, it is mostly used for representing the primary short sword for Ancient Roman soldiers. The ancient Roman swords were quite similar to the early Greek swords. But, later on, Romans started using a sword used by the Celtiberians amid the conquest of Hispania. This was a short sword known as Gladius or Hispanic Sword.
After the reform of Gaius Marius, the Roman army equipped themselves differently. They were often seen armed with a couple of javelinas, a shield, gladius sword, and a dagger called pugio. In the later period of their empire, they also used darts. Javelin or pila was used as a throwing weapon by the army. It worked well in the favor of Romans as it disabled their shield and disrupted their formations before actually engaging in a combat. So, a combination of pila and gladius was quite advantageous. A soldier led with a shield and used sword for thrusting actions.

Xiphos was the most popular sword used by the Greek. It is a double edged straight short sword made of iron and steel. Ancient Greek used it for fighting their enemies. But, it was not always the primary weapon. Rather, it was used as a secondary fighting weapon after javelin or dory. The length of the blade ranged between 18 and 24 inches. Spartans though, as reportedly, used blades of length around 12 inches somewhere around the time of Greco-Persian battles.
A Xiphos sword often included a midrib and a lenticular and diamond in the cross-section. This was usually hung from the baldric under the left arm. In case a spear was broken, this was the second option taken by the fighters during a close quarters combat. Though many swords from the history are found even today, but in the case of Xiphos, just a few survived.
Xiphos is also a name used for sword by Homer as mentioned in the Stone’s Glossary. The book suggests that this sword featured a double edged blade with width about two-thirds of its length from its point. Also, it is mentioned that it has a very long point.
Xiphos has a blade designed like a leaf which makes it great for thrusting and cutting actions. Though this design is very common, it existed since we established the first ever sword. This sword had steel blades, bronze blades and sometimes iron blades. However, bronze was the most common material used for forging this blade because it was softer and easy to form a leaf shape. Also, the earliest xiphos had a bronze blade. Another sword that it resembles is the Celtic La Tene short sword which had a very similar blade.

Cutlass is a short sword used for slashing. It had a broad, straight and slightly curved blade and sharpened enough on the cutting edge. The hilt of this sword featured a basket shaped and solid cupped guard. During the early Age of Sail, it served as a great naval weapon. The term “cutlass” was used for a machete like blade during the 16th century and was a variation of English word coutelas. However, cutlass is believed to be a French word.
The Frenh word Cutlass is also a variation of an Italian word coltellaccio which means a short blade sabre or a large knife. The short blades sabre was a popular weapon during the early 16th century. A coltello knife was popular in Latin America and was smaller in size. In the Carribean where English is the dominant language, cutlass is used to describe a machete. So, basically it is a relatively shorter sword but looks like a machete.

The Model 1832 Foot Artillery Sword is a short sword with a straight and double edged blade. It has a 25 inch blade with a brass mounted scabbard. This is a knife manufactured and used in the United States. However, the blade of the US version is 19 inches long. The production of this version initiated in 1832 in Massachusetts. Later on, it was manufactured and supplied in Philadelphia, Pennsylvania as well.
Many people believe that the original artillery sword was first established in 1816 but did not gain the popularity. A similar design was repeated in 1832 and it looked like a Roman Gladius sword. It was used as a personal sidearm by the soldiers. Troops used it for fighting their opponents, but civilians also used it as a weapon for self defense.
So, these were a few short swords that made a name in history. However, one thing is pretty clear that these small swords were never considered primary fighting weapons. Rather, they served as secondary or sidearm weapons. However, they were not just used by the soldiers but also by the civilians for general cutting tasks. 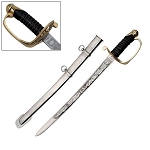 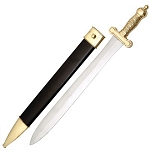 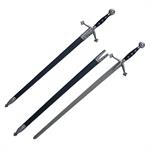 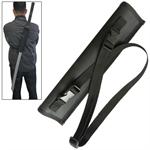 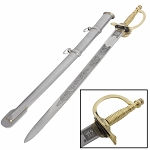 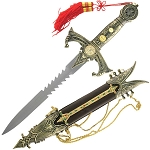