How Effective is a Baton for Self Defense?

If you search for self defense weapons, there are plenty of choices. There are stun guns, knives, pepper sprays and more. But, a better choice must be an impact weapon, like a self defense baton. You may not know this weapon, so, lets dig it deep.

What is a Self Defense Baton?

A baton is a long stick or a club often made of metal, wood, plastic or rubber. It is generally carried as a defensive weapon or a compliance tool. However, it is not common among the general public. It is believed to be a weapon carried by the law enforcement. You must have seen officers carrying a baton as their symbolic weapon.

How is a Self Defense Baton Used?

As the name suggests, the most obvious use of a baton is for self defense. But, it is used is most of the ways as a weapon. You can use it defensively for blocking and offensively for striking and jabbing. Also, it aids in the application of arm-lock. The bludgeoning actions or normal striking are not created by a direct or simple hit, like in the case of a normal blunt objects.

Furthermore, batons can also be used as non-weapons. For instance, they can assist in breaking windows for freeing the people trapped in a vehicle, or turning out pockets of a suspects during a search. A few criminals also use batons as the weapons because they can be concealed easily and are constructed simply.

But, we are focusing on the use of batons for self defense, So let’s stick to our main point.

There is a tremendous variety available in the market if you go out there to get one for you. However, this variety relates to shapes, sizes and styles. But, when it comes to types of batons, there are basically two types, including fixed length batons and expandable batons.

There are some smartly designed batons, such as a stun baton, but ignore them because they don’t fall in the category of types. Instead, they are the fixed length batons that are designed differently or intricately. Mainly, there are two types of batons, including fixed length baton and expandable baton.

It is a normal baton that has a fixed length that means the length cannot be altered. This is the most frequently used baton, but a little old-fashioned. Shaped like a normal club, it has no moving parts. Therefore, it is a strong and durable fixed length baton. Those with no moving parts are considered powerful because more moving parts means more chances of malfunctioning.

Since there are no moving parts, you can use this baton without having to worry about functioning failure. All you need to do is to strike your opponent with some force to knock him down. Most of the officers you this baton because of their long-term durability and incredible strength.

Expandable Baton is a modern type of baton which is designed in a unique way. Contrary to a fixed length baton, an expandable baton does not have a fixed length. The unique feature of this baton is that its length can be altered. There are more than one moving parts in this form of baton.

Typically, there are three parts and each of them can be concealed in the lower part, The upper parts are thinner compared to the lowest part which is the thickest among all. This is where the upper parts can be concealed. Another advantage with the expandable Police self defense baton is that its size can be minimized.

As some parts can be concealed, the overall length of the baton can be lowered. Hence, if you require shorter baton, it can be shortened as per the requirement. So, this is why most of the law enforcement officers prefer using these batons. But, are these batons good for self defense is what is needed to be answered.

Baton for Self Defense

Is it effective for self defense? Well, a baton looks a useful weapon because it can inflict a serious damage. Anything that can do some damage is good for your defense. Because in the end, all you want is to hurt the attacker and escape the situation.

If you are able to inflict an injury, you can find yourself some valuable time to run for your life. But, in case of baton, there is more than that. Following are some key reasons that solidify the claim that baton is an effective self defense weapon.

i) Easy to Conceal

For instance, it is almost impossible to carry guns or knives that have lethal impacts. The last thing you want is that someone catches you with a loaded gun or a large blade. But, with a baton, you can prevent such issues. A baton is easily concealable. As it looks like a club, it does not seem that lethal.

Also, with an expandable baton, you are even able to reduce the overall size to make it look like a small stick. So, it is easy to move around while carrying it. It can bring an element of surprise which can make all the difference in case an emergency situation faces off. But, losing that surprise may provide the attacker an opportunity to disarm you.

The greatest plus with the Police self defense baton is that you don’t need hours of training to know how to use it. It is a simple, indeed a simple weapon, like a club. So, you can just hold it and hit or strike the opponent with some force behind your strike. And there's absolutely no skill needed.

If you have not fire a gun before, you are simply unaware of the way to use it. On the other hand, in case of a baton, first you don’t need a permit. Secondly, if you have not used it before, there is nothing to worry about. You can easily swing the baton, and that’s all you need to do to cause an injury to the attacker.

Now, show me a better self defense weapon than a baton! But, if you first practice hitting it, you can further enhance your skills. You can attain more accuracy after some days of practice. However, if you are using it for the first time, there is no need to learn the ways to use it.

iii) No Aim or Ammo Required

If you ask me what makes a baton the finest option for self defense, it is this feature. No need to aim or no ammo required. When using a handgun, you need to have ammos and then you must aim your target. In case you lose your aim, you will end up getting in trouble.

If you miss the shot, there are chances that you will be caught by the attacker. A baton does not require you to insert any aims. Also, it has a long reach, so you don’t need to aim the target first. You can hit the attacker anywhere, and it would be effective regardless of the part of the body where you hit him. Also in case of a knife, you need to aim your target.

A small blade must penetrate in the right part of the body in order to do the damage. A blade is not that effective at every part. However, a baton is equally effective whether you hit the attacker on his head or his legs. You can hit and run to escape the dangerous situation. So, it is a better option for self defense than a knife or a handgun.

Let’s be honest! You would never want to get close to an attacker. A good self defense weapon is the one that allows you to stay away from the attacker’s reach and still do the damage with the weapon. So, which weapon allows that? A knife? No way! If you have a knife, it has a small blade, so you can’t hit from a distance.

You need to be closest to him to stab him with your blade. Yes, a gun may enable you to do this, but for a gun, you need to aim your target first. In such an attempt, the attacker may find some time, so he may attack you first. So, what is the most appropriate option? A baton. A baton has a long reach because of its length.

It is many times greater compared to a knife. So, you can reach your attacker from a distance. Plus, you can easily strike him by staying away from him. An extendable baton further increases your reach. Its length can be altered and enhanced as per the requirement.

So, if you want to strike from some distance, simply increase the length and do the damage from a distance. Do you think there is a better option than this phenomenal weapon? Dare to tell me!

There are numerous self defense weapons, but not all are legal. Most of the lethal weapons are illegal to carry. For instance, a handgun is illegal in many states which means you can’t carry it in those states. Similarly, knives are not allowed in most of the states.

The majority of bladed weapons are illegal because they are lethal. A lethal weapons means a weapon that can cause a severe injury. Yes, a blade can cause serious damage because it penetrates in the body. Once you stab someone with a knife, it is sure that the blood would pour out.

Similarly, a handgun can do serious damage, and even kill the victim. That’s why these weapons are not permitted. So, you can’t carry them everywhere. As a nice guy, I won’t encourage breaking the laws. So, why not get a non-lethal weapon that you can easily carry anywhere.

Baton is a non-lethal weapon and allowed to be carried in majority of the states. Because of its non-lethal nature, it does not cause a severe damage. The police officers are not supposed to inflict an injury to the culprits, and that’s why they require such weapons.

vi) Usable At a Moment’s Notice

So, you need to first deploy the blade to make it read for combat. This is certainly a long process and while you are doing this, the attacker would be finish doing what he is looking for. Similarly, in case of a handgun, you first need to load an ammo, cock the gun and then fire.

Again, the process takes too long, so not an ideal option for self defense. A self defense baton is ready to be launched at a moment’s notice. It does not fit in your pocket, so you either have it in your hands or in your car. So, once you face an attacker, you can quickly lead the attack to him.

An ideal self defense weapon has to be battle ready. And a baton proves to be effective in this regard.

So, is a self defense baton an effective weapon? The above described reasons determine that it is an extremely effective self defense weapon. As compared to knives, handguns and other means for self defense, batons are far more useful. They are easy to use and concealable, so you don’t require training for learning how to use them.

They don’t require any ammo's and have enhanced reach compared to a knife. Also, a baton is a non-lethal weapon because it does not inflict a permanent injury to the victim. Thus, you can carry them anywhere due to their non-lethal nature. Finally, they can be used straight away. Hence, the bottom line is that batons are effective as self defense weapons. 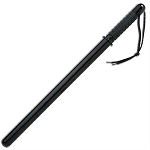 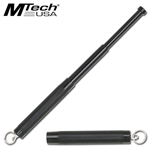 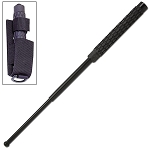 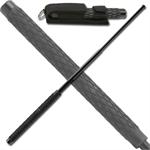