Karambit Knife - Is It Really an Effective Fighting Weapon?

What is a Karambit Knife?

A karambit knife is known to be a lethal knife, traditionally used in close quarter combat. It is believed to be originated in Southeast Asia where it was carried by the warriors as a fighting and a utility knife. The most unique thing about this knife is its design.

It has an ergonomic handle which incorporated a couple of safety rings, and a curved blade. The basic purpose behind the establishment of this knife is to ensure the safety of the user, no matter the situation. It is designed to offer maximum functionality and precision in any condition or environment.

The design of a karambit is based on the tiger’s claw, as suggested by most of the historians. Due to its curved blade, it can dig deeper and serve slicing, tearing, ripping and hooking. So, it is useful as a survival weapon? But, does it worth to be a part of a fighter’s weapon arsenal?

History of Karambit Knife as a Fighting Weapon

In Malaysia and Indonesia, karambit knife is known as kerambit while in rest of the world, it is named karambit. It has its origin in West Sumatra where the Minangkabau people used it in their agrarian culture. During the 11th century, karambit was used as an indispensable tool by the farmers who harvested root crops, rice with this exotic blade.

Furthermore, there are evidences that it was used for skinning the animals. It’s shaped resembled the claw of the Sumatran Tiger, and at times it was called Kuku Macan, which literally means tiger’s claw. During this period, karambit knives were regarded as a last-resort weapon by the warriors of Indonesia as opposed to the Dutch Colonists.

There are many evidences that karambit was a fighting weapon in Indonesia. The Indonesian warriors always remained equipped with these knives for battling their enemies. In addition, the Indonesian women tied them to their hair and used them for their personal protection.

It is pretty clear that karambit knife was earlier used by the Malaysians and Indonesians. However, the European colonization of the Southeast Asia made the way of this knife to other countries nearby, including Loas, Cambodia, Thailand, Philippines and Myanmar etc.

There are still no evidences regarding how it came to the American continent. However, a few historians are determined that its introduction coincided with the emigration of a few Martial Artists of Asia to the United States. When it comes to their usage as a weapon, there are differences with respect to countries.

For instance, in Philippines and Indonesia, karambits have long been used as everyday carry knives that mainly served utility purposes. However, they could readily be doubled as self defense weapons if required. But, the curved design of the blade along with the safety rings make these knives more advantageous compared to other knives.

They were multi-functional and could be used for farming, fishing, hunting and combative applications. Any task which required a precise and efficient knife that provided unparalleled user safety could be accomplished with a karambit knife.

However, traditionally, karambits were famous all over the world, and even today, as the combat weapons. They aren’t just for self defense and fighting, rather they could be useful in utility functions. So, it was a popular weapon among those who wanted more out of a knife than just an offensive and defensive tool because it could be an effective everyday carry knife.

Hence, it wasn’t necessarily a fighting weapon in the past, rather it was a utility tool as well. But, let’s see whether a karambit is an effective fighting weapon today.

How Karambit Knife is an Effective Fighting Weapon?

How to Perform Tricks with the Karambit Knife? What’s the greatest feature of a fighting knife? Most probably, it is the deployment speed of its blade. A karambit knife becomes an effective weapon because it can be deployed pretty quickly and easily. It comes both in fixed blade and folding deployment mechanism.

When considering the fixed blade, you can draw it very quickly when needed. However, in case of folding karambits, some practice would make you able to draw the blade at a rapid pace. So, this is in fact a battle ready knife. You can quickly snab the blade into position and attack your opponents to tear them apart.

Secondly, you want your weapon to be secretly held. In any battle, you want to deceive your enemies by not disclosing what you have got in your arsenal. You would love to surprise them by pulling out a weapon at the very last time.

This is understandable that you won’t like to express your strengths and weaknesses to your enemies too early to end up making them ready for that. In such instances, a folding karambit is tool good as a fighting weapon. It can be carried in your pocket comfortably and can be pulled out at the last minute to surprise your opponents.

It is also better in terms of safety and comfort. If you are carrying a folding karambit, you don’t require a sheath as well. The blade is folded into the handle to make it comfortable and safe to carry.

A karambit knife has all the features you might be looking for in your ideal fighting weapon. One of those features is the safety ring. The safety ring offers the doubling benefit, like a knuckle duster. This makes it a blunt tool for distracting your enemies and set them up for a follow-up slash or cut.

However, try using it in the reverse grip by placing your index finger in the ring. This would allow you to flip the knife and slap your opponent with the blade, and make certain lacerating moves. In addition, it would enable you to use the fingers and thumb for gripping the opponent as well as holding the knife.

Another key advantage offered by karambit knife during a fight is control over the weapon. Dropping your weapon is the worst thing that may happen during a fight. Dropping the weapon means you are landed in trouble and your opponents can now easily destroy you with their weapons.

What makes karambit an effective fighting weapon is that you can’t drop it because of the safety ring. As you put your thumb or finger in the ring, you gain a significant control over the knife and no one can take it away or make you drop it. This is the reason why many warriors used karambit as their backup weapon during fights.

One of the most considerable feature of karambit knives which makes them effective fighting weapons is their multi functions. A karambit isn’t just a stabbing weapon like many other knives, it is a great grappling tool as well. They have the sharpest blades that can do a severe damage to your opponent’s arteries, tendons and nerves.

Furthermore, if you are skilled and well-trained with the use of karambit knife, you can use it for stabbing, poking, punching, slashing and flailing actions. Hence, karambits are extremely effective as fighting weapons, given these advantages.

How Karambit Knife is Ineffective as a Fighting Weapon?

Now we come to ineffectiveness of a karambit knife as a fighting weapon. There are not many arguments against the karambits in this regard, but certain key points are worth-mentioning. For instance, folding karambit is not that quick to deploy.

In hand to hand combats, you want your weapon to be deployed quickly. In case you lack skills, you will end up being vulnerable to your opponent’s attacks. If your knife is relatively slow to deploy, honestly, don’t think it is an effective fighting weapon.

What are the expectations from a fighting knife? A good fighting knife needs to be a good survival knife as well. This is where a karambit knife disappoints. They can cut, but aren’t suited for heavy-duty tasks, such as spearing animals and other survival tasks.

Karambit Knife has a limited reach which further reduces its effectiveness as a fighting knife. If you have a fixed blade karambit, it’s blade is longer compared to a folding karambit. In case of a folding karambit, the blade is small because it is to be folded inside the handle.

In case of a fixed blade karambit, the blade is curved which makes it shorter. Straight blades are often longer and provide more reach. So, karambit knives with their shorter blades offer restricted reach. Hence, you need to be pretty closer to your opponent in order to stab or slash him.

This is perhaps the reason why many consider karambits as weapons for self defense rather than a fighting weapon.

Based on the advantages and disadvantages of karambit knife as a fighting weapon, it is hard to make a decision whether it is a worthy addition to a warrior’s weapon arsenal. So, is it really an effective fighting weapon? To be honest, the answer can’t be a straight yes or a straight no.

However, it depends on the skills of the user. If he has taken his time and invested in training, it can be an ideal addition to his weapons arsenal. Like several other weapons, the final decision should depend on the individual.

On the other hand, if the user is not skilled enough to use the curved and exotic blade of a karambit, seriously, karambit won’t be an effective weapon for him. He should better master a different weapon instead of karambit. Hence, a karambit knife is an effective fighting weapon, only in the hands of a skilled user. 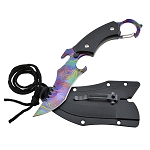 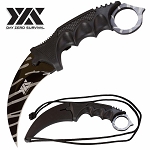 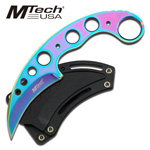 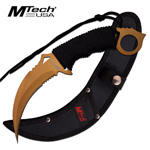 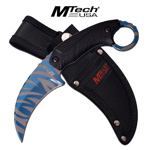 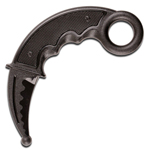 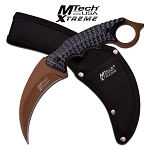 Tops EX karambit, the modern extension and final argument. If insufficient, carry and use two. -30-