History of the Legendary Trojan Helmet

A Trojan helmet has its roots and origins from the famous city of Troy. The word “Trojan” actually became famous from the renowned Trojan war between the people of Troy and the Greeks in late Bronze Age and took place in the city of Anatolia.
People mostly think of Greek mythology, architects, philosophers, scholars when they hear the work “Greek” but very few know that they were exceptional in wars and weapons too. Their weapons, armors and most importantly their shield helmets were quite effective and are even famous now.
The Greek helmet does not point to any single piece of helmet.
Various kinds of helmets were made and worn by different kingdoms and estates of Greek. A few renowned names are Attic helmet, Spartan helmet, Cretan helmet, Corinthian helmet, Phrygian helmet and the famous of all Trojan helmet.
A Trojan helmet was constructed in various colors of black, brass, silver and generally bronze. 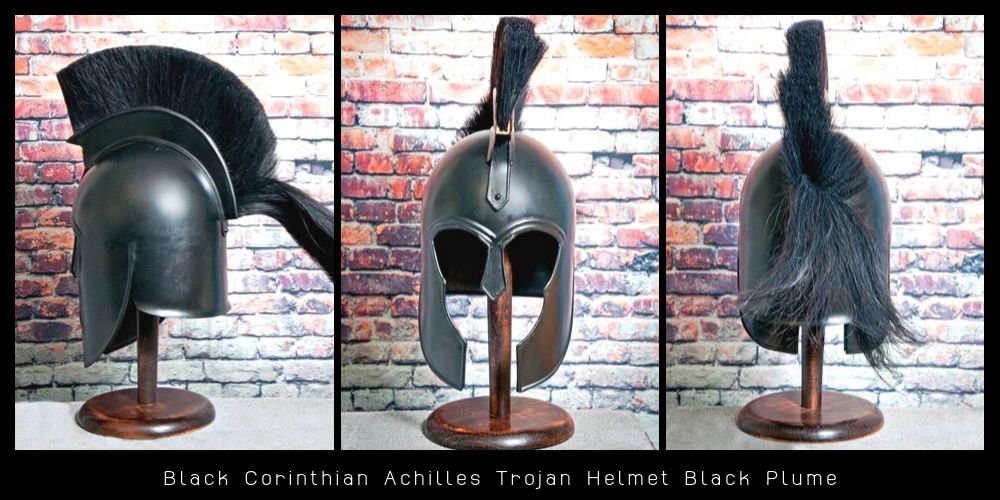 These helmets were seen worn by Greek soldiers in numerous wars over the years. The designs of these helmets may be similar but each one of them was an updated version of its predecessor and brought a unique or new feature to the design. These war helmets were made in different colors.

A Brief Insight to the Story of Trojan War

Before indulging into the interesting story of Trojan war and its events, we must first understand that the story is way beyond reality and even the famous Homer’s Iliad has stated more myths than facts.
The story starts from the Greek Gods whose quarrel started the war between Troy and the Spartans. Aphrodite, a Greek goddess made Helen fall in love with Paris of Troy who took her away with him.
Helen was the wife of the king of Sparta, Menelaus.
Menelaus in anger led his army towards Troy along his brother Agamemnon who was the king of Mycenae. They seiged the city of Troy for ten solid years. According to myth, the city of troy has its outer walls built by two Greek gods, Poseidon and Apollo who were ordered to serve the Trojan king by Zeus.
The Trojan war started and the people of Troy who took part in it were called Trojans.
A Trojan carried and wore Trojan helmet during this war to shield and protect himself as these helmets were known to be quite effective. The war also resulted in the death of hector who was a Trojan prince along with numerous other deaths. The Spartans sieged Troy for 10 years to get back Helen and to punish the Trojans for Paris’s insult to the Spartans for eluding their queen.
However, the walls of Troy were so strong and impressive that the Greeks even after immense struggle of ten years couldn’t get through. That’s when they decided to leave but history tells us that Troy was sacked. Right? Yes, the Greeks were very cunning and witty.
They left a large wooden horse behind them right outside the gates of Troy. The Trojans debated so much about it and even after so many warnings given to them, they brought the horse inside the city. Who knew that this wooden horse would be the reason of their downfall.
At night, the wooden horse opened up and came out numerous Greek soldiers led by Odysseus who then attacked Troy, took back Helen to their King and won the Trojan war. Yes, leaving a wooden horse outside Troy was a remarkable trick of the Greeks and that’s what won them the war.
That’s where the Trojan helmet got famous and the term Trojan actually came into being.
However, after the Greeks defeated the Trojans, they left for their own city with their queen who lived there till the death of her husband, Menelaus. Later, she was exiled to an island known as Rhodes where according to various reports, she was hanged. That’s all about the impressive story of the Trojan war.

The Obsession of Today’s People With Trojan Helmet

Trojans and Spartans lived and died but left these interesting stories and some legendary weapons and armors. Among them Trojan helmet is one masterpiece which can be found nowadays in many stores worldwide.
Even after so many years, people still are obsessed by this ancient piece of weaponry and spend so much to get their hands on the genuine and best Trojan helmet for them.
These are used nowadays for decoration purposes and are bound to impress anyone who sets a foot in your home and looks at them. Trojan helmet is still made and constructed in the same way it used to be so many years ago. The elegant design, beautiful colors and plumes are still same and compels the onlookers to have this beautiful piece of history for them.
If you are also a great fan of history and ancient masterpieces, then Trojan helmet will be a stunning addition to your collection as well.
Blog Home
Categories
Recent Posts
Archives
SHOW SIDEBAR