The Types of Modern Collectible Swords Enthusiasts Are Crazy For!

When we count warfare weapons, we firstly consider nuclear weapons and firearms. This is because we have been in the modern world where weaponry has been advanced. However, if we go back a couple of centuries, swords were the main fighting and warfare weapons.
A sword is a bladed weapon along with cool knives and daggers. A long ago, the world had not invented guns and firearms. Hence, they relied on knives, daggers and swords. Among these bladed weapons, swords were the most lethal weapons and the largest ones too!
Hence, swords served the warriors and soldiers for a long time. Though they did use daggers and knives but those were secondary weapons. A sword was the primary fighting weapon. However, gradually, swords were replaced by firearms and guns.
The use of swords declined, but the popularity of these bladed weapons never declined. Even today, swords are very popular. The modern enthusiasts are crazy for these swords and love to maintain a collection of these swords.
However, modern swords are quite different from traditional, old fashioned swords, specifically in terms of appearance, blade design and uses. They are used differently compared to traditional swords.
Today, swords are collectibles, decor items, and cosplay weapons. However, the types of swords used for these purposes are different. Each sword offers a different use. Since you are a fan of swords, you would like to explore more about the history of these powerful bladed weapons. So, here is everything you need to know!

What Were Traditional Swords Used For?

Traditionally, swords were only used for fighting and combat purposes. The ancient swords were made of steel and carbon steel. 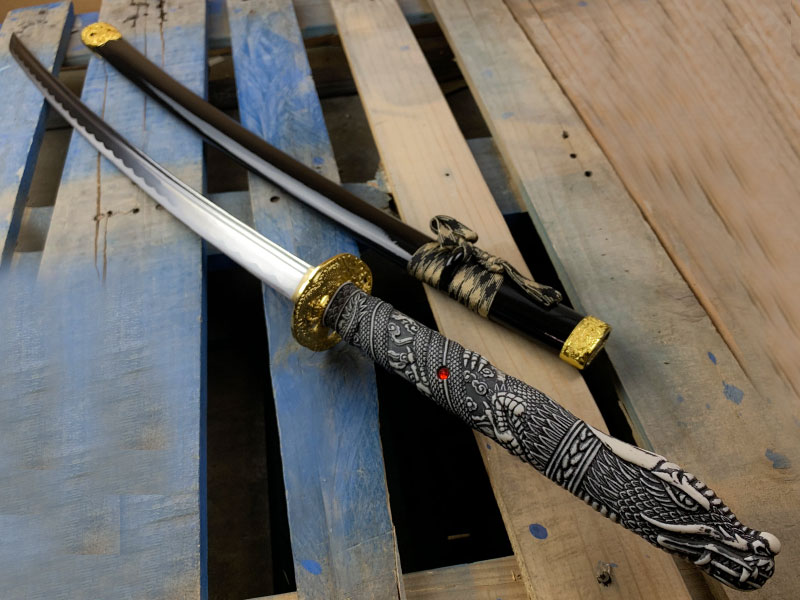 We mean, the blades were made of carbon steel or real steel. In any case, the blade possesses severe power to make it a lethal weapon.
In the past, a sword was a necessary weapon to carry in a war. An ancient warrior used to have a sword in his dominant hand, and a shield in his other hand. In addition, they used to wear armor to keep themselves protected from the swords. Their swords had sharpened blades and had serious strength to cut their enemies into half!

What About Modern Swords?

In the modern days, swords are no longer lethal fighting weapons. They are no longer used for warfare since nuclear arms have replaced them. As the world stays away from wars, that’s the end of debate. However, swords never lost their popularity. Today, these are used for purposes other than combat and warfare.
The more important thing is the types of swords these days. We have different types of swords, and each offers different uses. The modern enthusiasts are crazy for these swords, hence, here are some popular types of modern swords:

Samurai swords are the swords that belong to the great samurai warriors. These are the warriors from ancient Japan. Modern enthusiasts love these warriors and love their swords even more.
A samurai sword is also known as a katana sword and is believed to be one of the greatest swords of all time. It has a long and thick blade with a small curve at the bottom of the blade. When it was used by the samurai, it was a bad-ass fighting sword!

Fantasy swords are the swords of some popular fantasy characters. These are the other popular imaginary characters from the fantasy world. In addition, these are superhero characters as well. Both anime and fantasy swords are extremely unique and have interesting designs that make them popular among the crazy enthusiasts of today!

As the name suggests, these are the swords that have been used in the movies. You must have watched movies that feature ancient times and wars. And we all love these movies, don’t we? So, those who are fans of these movies love to collect the swords of their favorite characters in the movies.

Just like movie swords, video game swords are the swords that belong to popular video games. You must have played games that involve characters that use swords to fight their opponents. These are popular swords among those who often play video games. So, you can find a sword that you use in a video game from the market.

Ninja swords are among the most popular swords in 2020. These are the swords of the great ninja warriors from ancient Japan. A ninja sword has a long and thick blade like a katana sword. However, it has a dead straight blade without any curve at all.

Medieval era was the best era for swordsmen. They got plenty of swords to battle their enemies. Even today, medieval swords are extremely popular. You can easily find replica medieval swords in the market if you are a fan of medieval knights and their swords.

Handmade swords are made of hands and with extreme care and efficiency. Another term used for these swords is hand forged. Yes, these are hand forged swords often used for decor purposes. These are also the most realistic swords you will ever find in the market.

Short swords are among the most popular swords as well. Crazy enthusiasts are really crazy to gather these swords. These are smaller than original swords are larger than daggers. Medieval knights used them as their primary fighting weapons. However, today, these are mere cosplay weapons and decor items!

How Do Modern Swords Serve the Users?

Modern swords are not used for combat and fighting purposes. These are used in a safe manner for following purposes:

First of all, swords have been used in making movies. Yes, that is why we have movie swords available in the market. All the movies based on some historic warfare and other aspects of history involve the use of these bladed weapons. Even fantasy movies and animated movies also involve the use of swords.

Swords have also been used as cosplay weapons. Role players consider them as necessary weapons to have in their collections. This is because they can use them for playing roles of ancient warriors. Specifically, they pay tributes to them by replicating them. These swords also serve as Halloween weapons.

In 2020, swords are being used as decor items. These are collectibles for crazy enthusiasts who can place them in their offices and homes in a way to beautify them.

Martial artists also use swords for training purposes. They learn different fighting and defensive techniques with these swords in order to become expert swordsmen!

Which is Your Favorite Sword?

Since you have explored all types of modern swords, what are your thoughts? We would love to hear from you! Let us know about the swords you love and eagerly want to add to your arsenal. Also, let us know which is your favorite sword. Below is our comments section, ensure to write your views on the swords we brought here!

Read Also: What to Look for In Battle Ready Swords?