What are 6 of the Best Ninja Weapons of All Times?

The Ninja stars are among the most famous and different types of ninja weapons of all times. Another name for the ninja star is the "Shuriken"; all Ninja-lovers must have heard about this one before. Not to mention the fact that it is typical for movies and anime series to show the Ninjas throwing some sharp-metal objects which are known as the "Shuriken" in Japan. There is a variety of the Ninja stars available in the markets; however, the most popular one and the most widely used one is the "flat-plate" ninja star. The shape of this most commonly used shuriken resembles an asteroid that comprises 4 arms.

You will be surprised to learn that more than 40 types of ninja stars are available out there in the markets. Broadly speaking, the ninja stars can be effectively divided into two categories; the "flat-plate" and the "stick" ninja throwing stars. If you have ever held a real ninja star in your hands, you will have noticed the "sandy" surface of the blades; whereas, the charcoal surfaces of the stats have been coated with silk in order to prevent it from rusting. Nonetheless, history indicates that the blades of the Shuriken were also coated with poison in order to damage the enemy to the fullest and ensure that they would die at any cost.

Referring to the origin of the ninja stars, it has been historically proven that these were effectively designed for self defense. The small and compact size of the throwing stars wasn't suitable for killing purpose. Therefore, the shuriken served as effective weapons of personal defense. In addition, the Ninjas also used the Shuriken to confuse and disorient the enemy. Despite the fact that we refer to the shuriken as a throwing star, the truth is that the intention was to "hit" instead of using it as a throwing object.

Most often, people tend to confuse the ninja swords with other swords and katanas used in that era of feudal Japan when swords played a vital part in the everyday life of people. The swords used by the Ninjas were specific as were the rest of the real ninja weapons. In fact, the swords were an essential part of the Ninjas; however, if the Ninja was disguised as a farmer or a monk, then they had other ninja weapons to rely on since the katanas and swords could give away their true identities. In contrast to the typical swords used by the Samurais, the Ninja swords were shorter in size; also, the blades of the swords were straight. The typical length of a Ninja sword was approximately 540 mm.

On the contrary, the swords wielded by the Samurais were at least 700 mm in length; whereas, their blades were more refined and curved. Much has been speculated by the historians with respect to the existence of the ninja swords in first place; many historians hold the viewpoint that the Ninjas crafted their own swords since they had to maintain a low profile and live their lives in a disguised form unlike the Samurais who carried their swords openly and with pride and honor since they were the state soldiers of the highest ranks.

Referring to the functions of the ninja swords, these were short enough to maneuver and use in tighter spaces. Not to mention the fact that the primary purpose of their sword was to "stab" the opponent rather than slashing and slaying them. Therefore, the material of the blades was rather coarse and dull as compared to the razor-sharp blades of the Samurai swords. The hand-guard of the typical ninja sword was square and rather big which was intentionally built to assist the ninjas in a variety of other tasks as well.

Now, this weapon belongs to the rather complex category of the real ninja weapons; however, it is essentially an interesting one. The "kusarigama" includes a sickle attached to a weight via a chain; the form and design of this ninja weapon are quite complex. The length of the connecting chain can go up to 4000 mm. Referring to the maneuvering mechanism of this ninja weapon, the weight of the "kusarigama" was thrown at the enemy's weapon in order to disarm him; subsequently, the final blow was delivered with the adjoined sickle which leads to the death or severe injury of the opponent.

Nonetheless, there is a variety of the maneuvering methods associated with the kusarigama; hence, the maneuverability of this original weapon varies from one user to the other. It is important to note that this weapon is not solely confined for the use of the ninjas; on the other hand, this weapon was exclusively built for the people who had no permit to carry real weapons and swords, such as the samurais of feudal Japan.

In this regards, the "kusarigama" was quite popular amongst the farmers, laborers, merchants, and other craftsmen. This weapon became popular among the Ninja community due to its compactness and smooth portability which allowed the Ninjas to conceal-carry this item without being detected. However, if one wanted to wield this weapon, then he/she had to be skilled at the maneuvering techniques of this ninja weapon; else, the mere presence of the "kusarigama" was of no use for the wielder. In this respect, only those Ninjas wielded the "kusarigama" who were quite skilled with the use of their bodies and this weapon in a combined form.

It would be wrong to exclude this amazing tool in the list of the best real ninja weapons of all times. The kunai is the representative for the perfect example of how a simple farming tool could be effectively transformed into a lethal weapon. Similar to the shuriken, the kunai is another famous and worldwide popular ninja weapon; the design and shape of the kunai resemble a wedge; whereas, the kunai is essentially made of steel. The design of the typical Nina kunai indicates that on one side of the weapon is a spear-shaped blade; whereas, on the other hand, you will find a ring i.e. a metallic circle with a hole in it.

The weight and length of the Kunai vary; the typical length of the Kunai isn't more than 480 mm and the typical weight of the Kuna doesn't precede 500 g. It is safe to state that the Kunai was exclusively designed to be used by the Ninjas alone. Referring to the usage of this small yet highly effective weapon, it was used for a variety of stealthy tasks, such as the breaking of a fence or a wall. For instance, the Ninjas would use a Kunai to break through the wall and making a hole in it; subsequently, they would insert their feet in those holes in order to climb up a wall.

Ninjas could also make effective use of the Kunai by tying a rope through the hole of the kunai and throwing it over a wall or a tree. Once the kunai got hooked, they used this tool effectively in order to reach and climb up the higher places. Nonetheless, the Kunai could be effectively used as a sharp fighting tool as well due to the presence of the sharp edge. Last but not least, the Ninjas made effective use of the Kunai for the lightening of fires as well by using it in the way of a "flint".

This is one of the most interesting real ninja weapons used by the spies of feudal Japan. Before we read further about this ninja weapon, it is important to know that unlike the Samurais, the Ninjas weren't essentially warriors. On the other hand, the sole purpose of the Ninjas was to collect information and report to their employers; in this way, the real Ninjas were essentially spies who knew how to escape from a situation and save them from getting caught. On the other hand, the Samurais could never desert a fighting arena. In other words, it was against the honor of the Samurais to escape from their enemies. The Ninjas, on the other hand, had numerous ways to escape from the enemy and remain undetected.

In this way, the Ninjas also had to carry certain real ninja weapons and tools which could help them in their escape. One of such tools was the "Makibishi". In case you aren't aware with the design and form of the "Makibishi" it resembles a tiny small-sized sharp rivet which was strewn by the Ninjas on the route in order to distract and entangle their enemies or opponents while escaping them at the same time. The Ninjas used to throw the "makibishi" in a greater number on the ground which would then cause distress and pain to the enemies who were chasing the Ninjas. The enemy would stomp on the tiny rivets and break the chain; while this would buy the Ninjas ample time to make a dash for safety and get out of the nasty situation.

To some people who aren't familiar with the history of Ninjas, it comes off as a great surprise that there were female Ninjas as well who knew how to fight and escape the enemy as effectively as their male counterparts. The female Ninjas worked in the disguised of ‘entertainers' which provided them with ample opportunities for extracting useful information from important men. The "tekko-kagi" belongs to the most amazing category of the real ninja weapons which were effectively used for scratching the enemy while being poisoned and ensuring that the enemy would die, no matter what.

Referring to the origin of this blade, it has been speculated that this was used as a farming tool as well. However, later on, it was developed into a useful ninja tool to be worn on the hands during a fight. The shape of this weapon resembles the claw of a bear with four nails made of iron. These iron claws could be found attached to a metallic ring. During a fight, the Ninja would wear the "tekko-kagi" in both of his/her hands or he/she would simply grasp onto the weapon while using it to scratch the enemy's eyes and face with the iron nails. If the iron-nails happened to be poisoned, then the enemy would have no chance of escaping his rather painful death.

Just imagine the fighting scene where the ninja and his enemy are facing each other; the Ninja would simply lung at the enemy's face or body with full force and impart maximum damage with the help of the "tekko-kagi". This ninja weapon was an effective weapon of self defense as well apart from serving as a weapon of offense. Since the claws of the "tekko-kagi' were made of strong iron, they could tear and rip the flesh; thus, causing maximum damage to the enemy. However, it was important for the Ninja to be skilled at the use of the real ninja weapons, such as the "tekko-kagi". 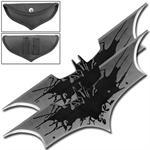 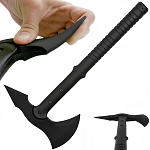 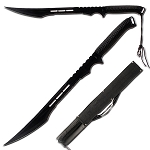 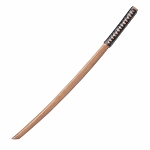 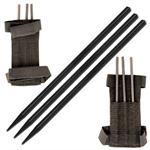 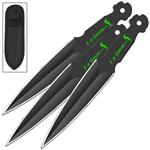 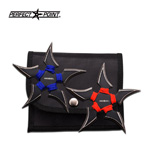 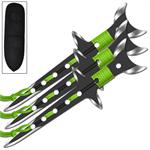 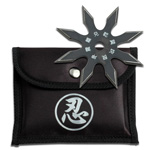 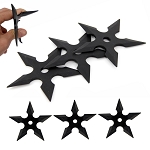